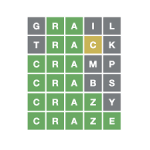 To reflect the new theme of trees and forest environments, Woodle has been renamed the classic word-guessing game. Does it sound interesting?

To win, a player must correctly guess the word with five letters. You can check the number of letters in the word by hitting the enter button. To figure out which letter is going where in the daily word, you will need to make several of these guesses.

By touching the letters, you can change their color. You can also use this feature to keep track of which letters you correctly guessed, which ones you misunderstood, or whether you missed any at all. Let's get together and do this!

In the Woodle game, a brand-new mystery task will be provided to you every day. The game's straightforward guidelines are as follows: If you estimate a 5-letter word, we'll display next to your guess a set of numbers indicating how many of those letters you correctly identified and how many you incorrectly identified. To determine which letters fit where and ultimately identify the daily word, you'll need to make a series of informed guesses. By touching the letters in the guess history and altering their color, you may indicate which letters you believe go there. This daily game has only been played once, but we can't wait to play it again tomorrow so we can tell our friends that we solved it.