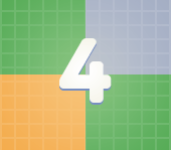 Wordle 4 Letters is a Wordle game in which players must identify a concealed word with four letters in six trials. Unlike in the Wordle game, you simply need to guess a four-character word in this game. Similarly, you get six chances to guess the game's core keyword. The letters will also be highlighted in green, yellow, and gray. The blue hue denotes the proper letter, which is in the correct location. Yellow denotes the proper letter but in the incorrect position. Gray symbolizes the incorrect letter, which is not found in the term. Other modes, such as 5 letters, 6 letters, 7 letters, 8 letters, 9 letters, 10 letters, and 11 letters, may be used to increase the complexity of the game. Let's play together!