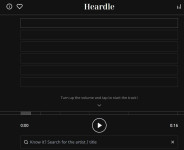 If you're a Wordle fan, don't miss this music-themed variation of the word guessing game. Instead of guessing five-letter words in Heardle, participants predict a song after hearing snatches of it. You begin with a little fragment of a song that becomes longer with each additional hint. You have just six guesses to identify the song and artist. Players may also search for artists and song titles to get a sense of the pool of viable responses. Heardle's library is built on "a selection of the most played songs in the last decade" on Soundcloud, so you won't hear any obscure album tracks. While you're humming along, try to recall the titles of these well-known tunes!