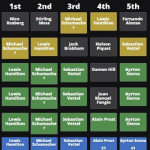 This online game is so addictive that players have been addicted despite the fact that Factle, an alternative to Wordle, forces users to complete a fact-based task every day. The next step is to choose the top five responses. Garrett Scott is responsible for the creation of Factle. As the name implies, it is a game built on facts. Participants are presented with a different set of trivia questions each day. Those who are already familiar with the game won't have any problem picking up the exciting new game called Factle!

Factle, which is one of the other Wordle alternatives that players enjoy playing because its framework is very similar to that of Worlde. Are you prepared to go? Sign up for Factle right now to learn fascinating new things!